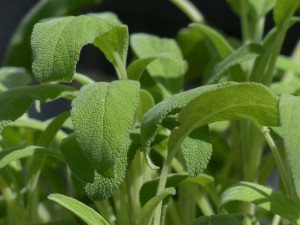 In a more suitable climate sage is an evergreen shrub, but as far north as Finland it is best to replant annually. The many varieties of sage differ by their intensity of fragrance and size and colour patterns on the leaves. The most fragrant being cultivated for culinary use and the more decorative used ornamentally.

Sage is quite easily grown from good quality seed sown into pots indoors in early April, after 6-8 weeks the plants are transplanted outdoors to a sunny location as soon as frost risk is over. After the plant has established itself and as it grows, the tips of the shoots should be removed to encourage the formation of a productive bush by mid-August. The tips and young shoots are used as the fresh culinary herb and finally at the end of the season the whole bush can be harvested, and the heathy leaves dried for preservation.

It is the classic herb for pork dishes, and is often combined with apple, mixed with onion to make a turkey stuffing, is an ingredient of classic British sausages, used sparingly in salads, and used for flavouring oils, salt and vinegar. It is also often used as a tea, for garnishing and decoration and the quite dominant flavour leads to the expression ´let sage have the stage`. It is altogether a great addition to any kitchen garden.