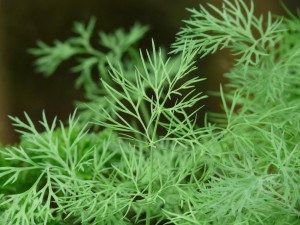 Dill, celery, fennel and parsley are all closely related belong to the same plant family, each having its own distinct fragrance and flavour. The fresh young leaves of dill are renowned as the partner to any fish, most famously as an ingredient of gravadlax. Tender young leaves bring flavour to salads, work well with eggs and for garnishing soups. The flowering heads are used to flavour gherkins and the seeds used with rice, cabbage, in curries and to flavour savoury breads.

Growing dill is not difficult, and seeds can be sown directly into the soil if you have time to take care of the weeds, or then grow first as transplants and plant out after 4 weeks. Sow progressively from April to late June to ensure a succession of young leaves. Early summer dill has a tenancy to bolt (prematurely produce flower stem) and the leaf harvest is minimal. Some varieties are better suited for their leaves and others known as crown dill for flower and seed, so choose the variety carefully.

It will take about 80-90 days to produce tall flowering dill, for leaves it is best to use young plants and these can be harvested as soon as the plant big enough usually taking around 40-50 days. If flowers and seeds are needed leave the better plants sown in late-May to early June to grow in relative peace, these should reach up to 1m tall and producing flowers become crown dill.

Good quality dill leaves should be young and as fresh as possible, this is when the fragrance and flavours are at their best. Up until late August such crops as dill are best harvested early in the morning when leaves are at their most turgid and then kept moist and cool. Smaller amounts of dill can be kept in a pale of water in a similar way to cut flowers. Poor quality in dill is often due to old coarse leaves, a high stem to leaf ratio, and wilting and yellowing due to being poorly kept or past their best.