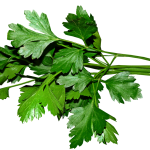 Parsley has been selected to produce three different types, Curley leaf (var. crispum), flat leaf (var.neapolitanum) and root (var.tuberosum). All parsleys prefer a warm sunny location to avoid ´legginess` and grow into compact productive plants, germination is often irregular and slow taking from three to eight weeks. It is best to start with transplants by ´pricking out` the seedlings as they appear in a germination tray, transferring them to small pots or cells, and allowing them to grow on for three to four weeks before planting out. This gives a more even crop and avoids early competition from weeds. When transplants have established outdoors, they grow with few problems, harvesting begins by gradually taking individual sprigs, this gives space and stimulates the plant produce new shoots. The young shoots at the center of the plant are the most fragrant and tender.

Although flat and curly parsley are very similar, the flat varieties tend to grow larger, their leaves often remain tender for longer and it may have a slightly stronger flavour. The more compact curly varieties have decorative appeal and older leaves will need finer chopping. The differences are small, but Chefs often choose the flat varieties. Root parsley looks like a small parsnip but has the parsley flavour, it is still rather rare in our cuisine.

Parsley is an excellent source of various essential nutrients and when used regularly in small amounts becomes an extremely valuable part of a healthy diet. It is used in leafy salads, finely chopped in sandwiches, it works well with egg dishes and in soups, and with fish and potatoes. A popular meal in Wales is gammon, parsley sauce, peas and potatoes.

Leafy parsley stores quite well for a few days if kept cool and moist after harvest, it is best to harvest early in the morning up until the late August. Quality problems arise from too much stem on the sprigs, leaves that have become too coarse and wilting and yellowing when stored incorrectly.